7 Powerful Triggers You Must Include in Your Email Copy

by Kristen Burgess
in
Comments are off for this post.

Do not miss reading 7 Triggers to Yes by Russell Granger. Let’s go over the seven triggers, because when you read the seven triggers you’re going to say to yourself, “of course.” After you say this, I want you to ask yourself if you’re using these elements in your email or copy. Most of the time, the answer is no.

If the answer is no, this will show you that just sending out content and sales emails is not enough to build a relationship.

The seven triggers are:

In the conclusion of his book, Russell makes a powerful connection. In fact, you can read a majority the book and not understand how really powerful it is until he lays it out at the end of the book. Russell makes comments that when we mimic these off-line human-based psychological trust triggers, when we mimic these in our sales campaigns, we are able to build trust and relationship and the sooner that we begin to implement all of these features, the faster the we’re going to sell. 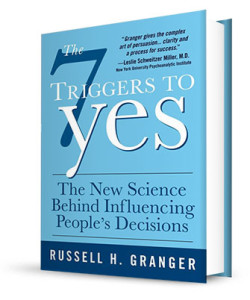 Because of this, I tend to use all of these in the first seven days my email campaign. Having said that, I don’t use all these on day one. Why? Because that does not mimic a genuine relationship. Unless you’re stranded on the island only have a few minutes to talk to somebody, you’re not going to include all seven of these elements.

When you meet somebody new you don’t go through all the psychological elements. In fact, not all these can be used all in one day, even if you spend all day with somebody. These elements need to be seen over time. Keep in mind, not everyone buys in the first seven days. Some people can take 30 days, some people are going to take seven months, and some people might take a year or more.

Some people come to me through a recommendation and buy right away. However, there’s already some trust built from this referral.

This one is self-explanatory. We think about it: what quantifies a friendship? What makes a friendship happen? Actually, it’s a combination of the other trust triggers. For example, reciprocity: I give you something and you give me back something. There”s a liking that goes on here. You like them, they like you. So why do they like you?

This is the easiest one to make happen quickly in your campaign. Remember a few paragraphs ago I discussed people who have these squeeze pages that are screaming, “Free” with highlighted bullet points, exclamation points and hype? That does not create a relationship that’s not creating reciprocity in the other person.

All this does is create an attitude that says, “I want to get what I can from you for free!” However, if instead your squeeze page, your articles, and your videos are friendly, and they give out good advice, and they say “If you’d like more good advice like you got in this article, then go over to this page and you can download a PDF that will give you 10 times as much information as you just learned.”
This begins to set up a friendship.

We are activating the reciprocity trigger here and in a way we are also activating contrast. Contrast is activated because someone you just met bought you something as opposed to everybody else who more than likely won’t buy you something when they first meet you.
This sets up I likability factor. We have to do the same thing on our squeeze page. It also should start before the squeeze page. It starts at the video, article, your content piece, and your website. It must be friendly.

What do we think about when we think about friendly? For example, when I used to have people do solo mailings for me I would have them use the subject line, “A free gift for you,” then have them just click the email. The subject line converted really, really well. Notice, this is very different than having a hyped up squeeze page.

However, when I switched to, “A free gift for you from expert marketer Sean Mize,” I got less clicks but more targeted leads. These types of leads will buy more in the long run because they have already been introduced to me by name the very first time they “met” me.
If this comes from an affiliate mailing, then some of the trust is being passed along from the person that they know who is doing the recommending. When they get to the squeeze page, it’s a friendly squeeze page, sometimes with my photo on it, or an audio that welcomes them and tells them how valuable the free gift is that they have the opportunity to download.

What are we doing here? We are activating friendship as well as triggering reciprocity. I am also activating contrast. Why? Because most people are not used to coming to a squeeze page like this.

I can probably get a very high open rate with just a headline and often, no name box, just asking for an email. We have seen the numbers: those types squeeze pages get more subscribers. But, I don’t want the subscribers, the people who don’t know who I am. I want them to see my face, I want them to see what I’m going to teach them. I want them to hear my voice. So, if they don’t like the sound of my voice or the way that I look, or the words that I use a squeeze page then they’ll not subscribe. This is okay.

If they don’t like my picture, my voice, or what I have written, then they’re not going to purchase from me or you. If they sign up, and this is true if you’re driving a lot of traffic, they are going to cost you money by hogging space, they may reach out and ask you questions but never intend to buy. I would much rather have a small list of people who like me, then a large list of people who don’t.